All concerts will adhere to both Adelaide Baroque's and the venues' COVID-safe plans including completing an attendance record, disinfecting practices and physical distancing measures where required. If you become unwell and have purchased a ticket to a concert, we encourage you to contact us and organise a ticket exchange/credit at no cost.

The French Violin – a new work for the Adelaide Baroque Orchestra,
composed by Padma Newsome

Devastating images of blood-orange skies made the town of Mallacoota an international symbol of the 2019-2020 Australian bushfire crisis. Now, two years on, Mallacoota resident, composer, performer, and community recovery worker Padma Newsome is bringing his experience to Adelaide with a new, post-fire work: The French Violin. Padma studied composition at the Elder Conservatorium in the 90s, then continued postgraduate studies at Yale as a Fulbright Scholar, where he formed the ensemble Clogs. He toured the world for many years before settling in Mallacoota and developing relationships with the people and the natural environment.

We chatted with Padma ahead of our world premiere performances with the Adelaide Baroque Orchestra in Adelaide and Strathalbyn (May 21-22) about how this special new work came to be.

Padma lives right on the edge of the Karbeethong forest, which the fires ripped through. He was fortunate enough to not lose his home, however, friends Ro and Kieran who lived just 400m away were not so lucky. Earlier in 2019, Ro and Kieran had entrusted a bundle of broken violins to Padma, which included an instrument made by Didier Nicolas, c. 1820, from Mirecourt, the French ‘capital of violin making’. It was in need of loving restoration, and in this remote corner of Australia, there just happened to be a luthier staying down the road at that time in 2019. Padma asked: ‘Do you think you might be able to help me out with this pile of broken instruments?’ 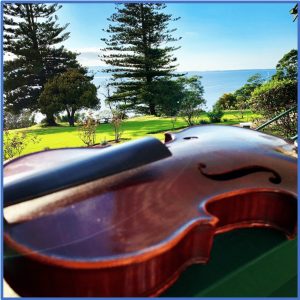 The French Violin in its original, broken state

‘He [the luthier] wasn’t up here with any of his specialised equipment, but he said, “oh yeah, I’ll have a go…” – he did have a vice and a saw and various things – and he’d ring me up and say, “Have you got a bit of ebony? Got a chin rest? I need a new fingerboard!”, and I’d run down and give him bits and pieces, and anyhow… the most beautiful thing is that he got this fiddle [The French Violin] up and running. Now it’s not a fantastic violin, but it’s got a very particular character.’ Interestingly, the violin seemed to settle best into baroque pitch (A=415 Hz, rather than the modern, higher pitch standard of A=440 Hz). We asked Padma whether the character of our baroque instruments would translate to the character of The French Violin itself.

‘I have composed for period instruments before, working with Ben Dollman and friends – I think it is a translation which sort of goes through filters… A challenge of understanding, and a surprise as well. I’m looking to be surprised by the sounds.’

The French Violin will be more about storytelling, rather than the direct translation of how the instrument sounds, or a direct representation of the post-fire landscape.

Padma explains: ‘I’m a melody maker, and I’m not sure that I spend a lot of time trying to “talk the land”. Peter Sculthorpe was a friend of mine – I was a viola player in Sydney in the late-70s and early-80s – and we played a lot of his music and other contemporary Australian work… that iconic soundscape work… we should probably be having this conversation with Sculthorpe!

I think mostly what I’m on about is my relationship with the land, and by extension, communicating these post-fire recovery stories. I’m interested in people making their own decisions about whether the music is representative.’

So, will this unique instrument be in Adelaide for the premiere?

Padma replies: ‘I’m thinking of bringing it, providing it can fit on the small plane and won’t have to be thrown into the hold! I think I’ll be able to bring it over… if not to play, but to show.’

Pictured above: The BeachFiddle group playing at Bastion Point, Mallacoota, July 2020 – ‘When COVID-19 hit, we were able to make music outdoors on the beach… behind us, everything’s burnt, but we found this lovely place to make music.’

We are honoured to be presenting the world premiere performance of The French Violin in 2022: Saturday 21 May at 7.30pm in Elder Hall, then again on Sunday 22 May at 3.00pm in St Andrew’s Uniting Church, Strathalbyn.